The sign of responsible forestry
Timber is considered a renewable resource yet this does not mean a new tree grows to replace each one felled. In fact, intensive felling leads to degradation of forests: valuable species are replaced by low value ones, soils become impoverished, rivers become shallow, animals migrate and indigenous people are deprived of their livelihood.
Recycle tells about the best known certification of timber: its logo is to be found everywhere, from juice packaging to beams used in building the Olympic Village.
The Forest Stewardship Council (FSC)™ is an international non-profit organisation, an association bringing together representatives of environmental and social organisations, timber sellers, foresters, small indigenous peoples, timber corporations and certification bodies from many countries, including Russia.

It has been calculated that, every year, 13 m ha of forests are lost forever. Tropical forests suffer most. The situation in Russia might be slightly better yet, even so, up to 20% of Russian timber output (according to independent environmental organisations) is of dubious origin.
It was in the early 1990s that the idea eventually became established that standards needed to be developed for responsible forest stewardship. The FSC (Forest Stewardship Council)™ got its name in 1990 and issued the first certificate in 1993. Its headquarters opened in 1994.
Twenty years later, the FSC had become the biggest certification system with offices in almost 40 countries. Forests have been certified in 79 countries and certification companies operate in 112 countries. 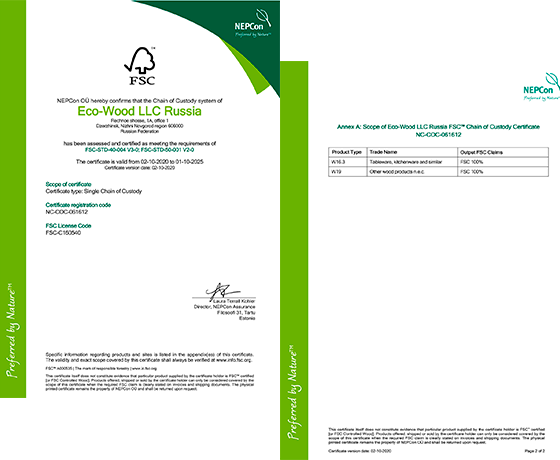 Articles that may be useful

Your reviews
about our company

We are making cool videos about ecology!
Watch them on our channel!
Have any questions? We will answer them
Thank you for your application!
We will contact you within 10 minutes

We are making cool videos about ecology!
Watch them on our channel!
Thank you for your application!
We will contact you within 10 minutes
The item has been added to the cart!
Product in quantity pcs added to cart
Checkout